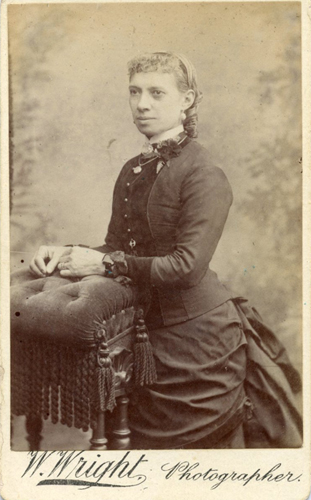 I don’t collect Victorian cabinet cards. Indeed, I own only one. And I didn’t buy it—as I do most photos in my collection—for the image on the front. I bought it because of the Studio stamp on the back. I found it in a box at a vintage fair. When I turned it over I spotted the address of W Wright’s studio: 188, 189, 190 Bethnal Green Road and the date, 1888. Number ‘188-190’ Bethnal Green Road is close to where I live, indeed I walk past its location every day. I say ‘its location’ because 188, 189 and 190 Bethnal Green Road no longer exist.

Many of the Victorian buildings along this busy East End thoroughfare have survived…most in various states of disrepair. But the 50 yard stretch within which our 1880s photographic studio was located contains post-war social housing estates on both sides of the road, doubtless this section of street was obliterated—like much of the East End—during the Second World War. We can get a good idea of what the studio may have looked like though. Just a few yards to the left of the studio’s location, the original Victorian buildings still stand, many are currently undergoing restoration. The images below show the location of the studio today (dead space in a social housing development) and a nearby building with Victorian-era shop-front likely similar to the studio as it once was (forgive my Sepia toning).

While I was disappointed that the building that housed the actual studio no longer existed, I was intrigued by the fact that a photographer was able to make a good enough living in this part of London to occupy a span of three shop-fronts. Remember, this is the very early days of the medium, when many people would never have had their photo taken. For those that did, it was probably a once in a lifetime experience. And it would have been relatively expensive.

I did some further research and, as luck would have it, social pioneer Charles Booth was mapping this part of London just one year after the date on the back of this cabinet card. His ‘poor’ maps of 1889 classified the streets of London according to poverty and prosperity and provide an insight into the location of W Wright’s studio.

The map shows that the photographic studio (marked with a white square in the map image) was located along the main road, most of which was classified as red or pink, meaning Middle Class/Well to do or Comfortable. But within a few yards of the studio was a section of road marked blue (meaning ‘Very Poor, Casual Chronic Want’) with a further section blocked in black (the lowest classification: ‘Lowest class. Vicious, semi-criminal’).

To the rear of the studio, is the Jesus Hospital Estate, a Victorian housing development of terraces, the centre of which was the magnificent gothic Columbia Road market building, strikingly similar in design to St Pancras Station. The market building was demolished in 1957, but the Columbia Road remains a popular market to this day. This area ranged from middle class to less well off. Most of the estate still stands.

So if the location of our studio encompassed the whole social range from Semi-Criminal to Middle Class and Comfortable, what can we learn from the photograph itself? The woman in the photograph looks to be in her 30s. She is dressed in neat, but not particularly opulent, clothing. She wears a wedding ring but is perhaps in mourning. She has deep, dark bags under her eyes, perhaps another indication of a recent loss. Although her face remains wrinkle-free, her hands suggest a life of labour. She wears a watch around her neck. Was she perhaps a nurse?

Was this woman herself on the cusp of ‘respectability’? Was this photograph taken to commemorate a death? At the time many people had their one and only photograph taken shortly after they died…sometimes posed as a corpse, dressed in their finest beside smiling family members. Or was this perhaps taken under more joyful circumstances, perhaps as a keepsake for a lover?

We will, of course, never know. I can find no reference to the fate of W Wright’s photographic studio or any indication of how long it was in operation. But the fact that I even wonder, is a great illustration of the power of photography. And of why I display a 120 year old photograph of a woman I do not know, taken in a studio that no longer exists and which, it seems, no one remembers.

My great grandparents were also photographed at W. Wright’s studio in Bethnal Green. My photo was I believe taken later as it appears to have different markings on the rear with a green background and gold leaf-like lettering but the style is the same.

There is no date on my photo unfortunately but great grandma looks around 25-30 in the photo which would put it around the turn of the 20th century.

One thing to note related to your article is that there are additional W. Wright branches to the one in Bethnal Green listed on the back of the photo. There is 98 Cheapside, 81 High St Whitechapel, 10 Upper Street Islington, 71 Green Lanes Stoke Newington and 422 Mile End Road.

So it suggests that W. Wright may have ultimately done well enough out of the photography business after all.

Thanks for the additional info. From what you say it looks like the Bethnal Green branch may have been the first then. It’s really useful to have the additional input as I could find very little elsewhere on the Web.

My Great Grandfather (1861-1900) was photographed at the studio, along with another man. I suspect the other man is his partner. My G/Grandfather was a doctor living and working at 254 Bethnal Green Road. The pic I have is circa 1888/9

I also have photos taken at W.Wright’s Studios in the late 19th Century, of family members.
Like previous people, on the back of the photo are references to the following studios of W. Wright:-
98 Cheapside
83, Bishopsgate Street, Without E.C.
189 Bethnal Green Road
422 Mile End Road
232 Mare Street, Hackney, N.E.

At the bottom of the photo has been printed the following intriguing message :-
No connexion with any other firm of the same name…….(What did that refer to?)

Very interesting, seems they expanded all over East London and had copycats!

My great great grandparents were photographed by W Wright in Bishopsgate Street Without, at a guess around the turn of the 20th Century. My great grandfather moved to London from North Yorkshire between 1891 and 1901 so I’m guessing his parents visited at some time and had their photographs taken as a souvenir. Thanks for this article, most interesting.

I have just been given some family history leading me to believe I may be directly related to William Wright and his wife Sarah. So finding all your posts was brilliant, thank you everyone. So hope what I have heard/seen is true, having an ancestor that captured moments in time for many families would be very humbling.

Hi, If it helps regarding dates, I have a photo taken at this studio, of my grandfather who had just returned from serving in the Boer War, almost certainly 1901. His parents owned a garage in Bethnal Green Road. Their surname was Thornicroft. Thanks for your investigation – most interesting.
Steph Bilton

I too have a photo of my greatgrandmother taken at 83 bishops gate City. There is what looks like a Royal appointment motif on the bottom left hand corner. the family were articicail florists and lived in the islington part of London. The photo could have been taken at any branch and the same phto cards used . There name was FISHER and her maiden name Mary Ann Harriet Whitehouse. A lovely photo .

I have a matching pair of photos (my paternal grandparents) taken at W Wright’s, probably the Islington premises. . on the reverse it lists premises at. Islington, Whitechapel, Cheapside , Bethnal Green and Stoke Newington. ( And a date which looks like1886. My grandparents married in 1889 so these photos may have been to celebrate their marriage.

I too have, (only a photocopy of) a photo of my great-grandparents… does anyone have any idea where the negatives went to after W Wrights business ceased to exist? Sometimes they found their way into an archive but to date I haven’t been able to find any records of such. Thanks in advance for any suggestions