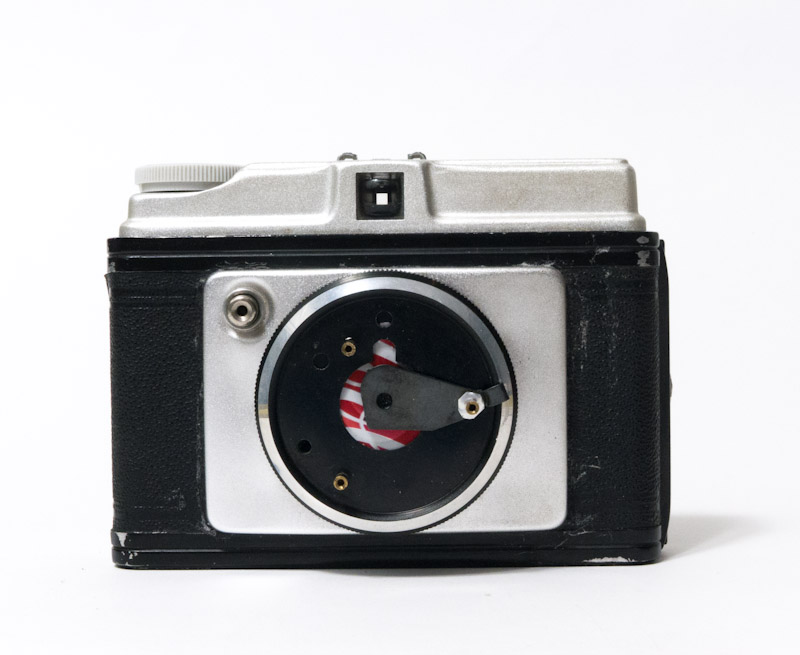 I’ve had an old 1950s Ilford Sporti camera sitting at the back of my cupboard for some years now. It came out of a relative’s attic and, despite having a sticking shutter, was given to me because I’m ‘interested in cameras’.  I’d always intended to convert it for pinhole use, but never got around to it. I was slightly put off because a Google search brought up only one description of a similar conversion in which apparently knowledgeable people claimed that the camera was ‘never meant to come apart’ and required brute force and a chisel to dismantle. Not a great starting point for a camera that, if primitive, still has to be light-tight.

When I finally knuckled down to the conversion one Sunday evening I discovered quickly that almost everything in the bulletin board post concerned was complete and utter bollocks. In fact, the Sporti comes apart very easily with only a watchmaker’s screwdriver and a slighlty larger flat-blade required to dismantle it. Not only that, many of the parts can be reused in the pinhole construction meaning you can convert the camera, complete with pinhole ‘shutter’, in less than half an hour and no fabrication other than creation of the pinhole itself is required.

Given these cameras can be had on e-bay for one or two pounds, I thought it would be useful to describe in detail the conversion process (see also the step-by-step images).

1)      Remove the two very tiny screws from sides of lens trim with a watchmaker’s screwdriver.
2)      Open camera back and remove three black screws that pass through the lens mount.
3)      Slide off lens to reveal shutter mechanism.
4)      Remove four brass slotted thumb bolts and loosen screw holding shutter in place. Keep the brass thumb bolts for re-use
5)      The shutter mechanism will now lift off as will the silver trim on the front of the camera. Glue the trim back on.
6)      Pry off the grip washer that holds the aperture mechanism in place and keep the aperture arm.
7)      Cut a square of tin from a coca-cola or similar can and shape to cover lens hole with a top tab to cover the slot above the lens hole
8)      Position the tin sheet and place the lens surround back on the camera and using two of the brass bolts, reattach the surround to hold the tin sheet in place.
9)      Make a small washer from a piece of can with a hole just big enough to pass over the thread of the third of the brass bolts.
10)   Take the aperture arm and attach a foam pad or felt pad to the aperture arm to cover the pinhole, you will need to chamfer the top edge so that it will open over the ridge left by the lens mounting ring.
11)   With the tin-can washer over the third brass bold, attach the arm to the hole on the right, this will form the shutter mechanism
12)   The aperture arm will operate in either the up or right angle position to uncover and cover the pinhole as required.

The focal length of the pinhole “lens” in the Sporti once the conversion is complete is 50mm (distance from hole to film). Calculate the size of the pinhole needed for sharp focus with the formula SQRT(focal length in millimetres)/22.5. So in this case SQRT(50)/22.5 equals 0.31mm.

Make the hole with a suitably sized needle. The thinnest needles I found were a set of beading needles (size 10-15) costing £1.50 for the pack. I used the smallest (size 15) to make my hole. The 15 beading needle is around 0.24mm in diameter (while the 13 is 0.30mm; the 12 is 0.33mm; and the 10 is 0.45mm), but I figured with wiggle, the hole would turn out larger than the needle diameter and also that it is easier to make a hole bigger later than smaller. Too small or too large a hole results in poor sharpness. Sand the reverse with very fine sand paper to remove any burrs.

The aperture can be calculated using the formula: focal length/diameter of pinhole, so 50/0.31=f161. The closest apertures to this in the standard sequence are f128 or f181.

To make calculation of exposure easy, choose one f-stop and set that on your light meter (I decided on f16). Then take the shutter speed given by the meter and double it six times (because there are six stops between f16 and f128). So one second would become 64 seconds, while 1/60 of a second would become one second. More simply, you are always multiplying the shutter speed given at f16 by 64. I made up a quick reference table in Excel and taped it to the back of the camera.

That’s it. One medium format roll-film pinhole camera. Total cost £2.09 (£1.50 for the needles and 59 pence for the can of coke). All that remains now is to load with film and take some pics! To see some examples taken with this camera see my pinhole set on Flickr (here). 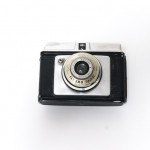 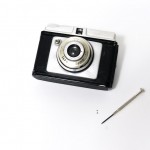 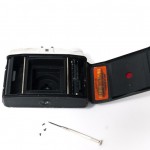 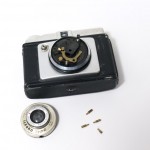 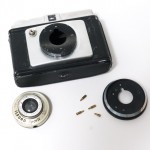 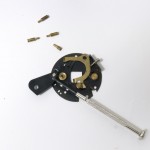 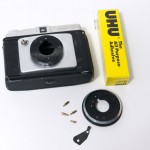 Glue back the trim 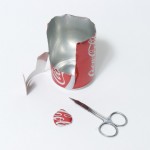 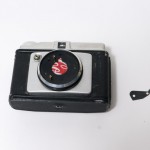 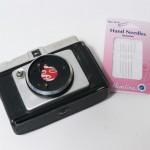 Pinhole made with beading needle 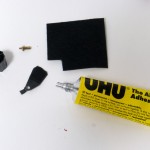 Use felt to light-proof the ‘shutter’ 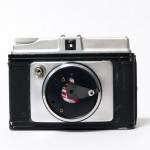 The finished pinhole camera with shutter

Thank you sooooooo much! I just got a Sporti and need to repair it. This was immensely helpful. Cheers!