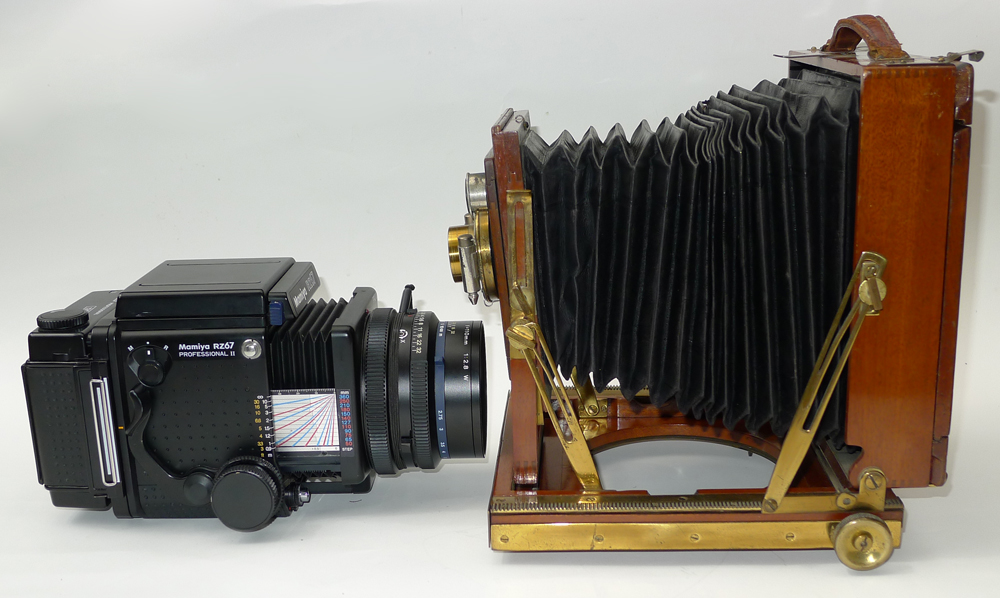 It’s said that you choose friends that are most like you. Most photographers think of their cameras as their friend. My Mamiya RZ67 is big, ugly and way too heavy, so I can see why I chose it as my day-to-day camera. Since switching from 35mm I use it for pretty much everything, from studio to street. But when I use large format, I switch to a Victorian half-plate Thorton Pickard Korona. My Mamiya PROii was made around 1995, the Thorton Pickard dates to 1895. But what is striking is that looking at the two side-by-side, they are almost identical technologically. One hundred years of advancement seems to have had no influence on the engineers who designed the RZ. It’s an unforgiving camera. Completely manual, no light meter, fussy about inaccurate focus and infuriating to level and align, but just like the Thornton Pickard, when you do things right, it produces stunning results.

So what exactly do these two cameras have in common? For starters, they both carry film in a removable back. The Mamiya takes 10 frames on a 120 roll. The Thornton takes two frames, one either side of a reversible plate holder. The only advancement that the Mamiya offers is its spinning back that allows portrait or landscape orientation without altering the camera position.

Secondly, both cameras use a ground glass focus screen. The Thornton’s positioned on the back of the camera with no mirror produces an upside-down image and must be viewed under a black cloth. The Mamiya with a single mirror produces an image the right-way up but back-to-front. It is viewed through a hood that replicates the black cloth of old.

Both cameras use a bellows focus. Here the Thorton scores over the Mamiya in that plane of the lens board can be altered allowing selective de-focus. Both cameras use a shutter built into the lens, rather than the camera body. On the Mamiya the shutter speed is controlled with a dial on the body, on the Thornton with a dial on the lens. Both have aperture adjustment on the lens. The Mamiya with the typical ring, the Thornton with a lever. The Thorton’s f-stop range is an interesting f8 to f45!

The Thornton scores again in its folding design that allows the body to fold back on itself and the lens to retract into the base for protection making it easy to transport.

It’s the simplicity of the Mamiya that I love. The very fact it makes no concessions to the modern world is what, for me, make it a great camera. And one benefit is clear: when I switch between my medium and large format cameras, there’s no learning curve. The techniques required are identical.

p.s. If you’re wondering what film I use in the Thornton…well I had a stock pile of Eastern European half-plate sheet film that has now dwindled, but have just discovered that Ilford produce vintage film formats once a year, and right now is the time to place an order. The Thornton takes a Half plate of 4.75 by 6.5 inches. You can order now from Silverprint for delivery in August.

Comment for Mamiya RZ67: A great piece of Victorian engineering