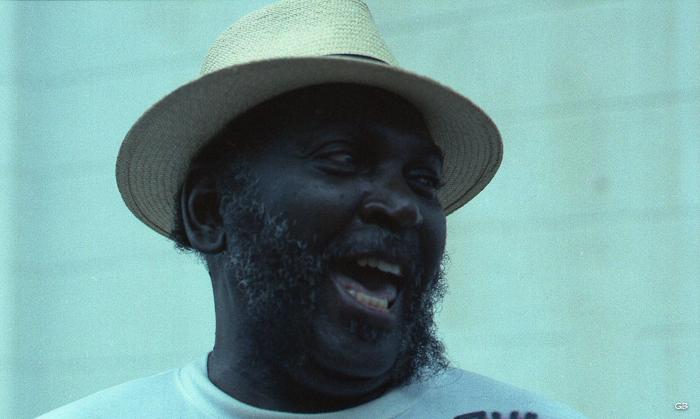 I’m hoping to start shortly on a portrait series. It’s something I’ve had in mind for a long time but always find an excuse to put off. I’ve not done a huge amount of portrait photography, but it’s something I want to do much more of. Some years ago I spent a lot of time in New Orleans and did try to get a project off the ground based around the city’s parade bands that perform at festivals and funerals. It was difficult not being a local and having a very limited time window, but I did manage to shoot a few one-shot portraits by hanging around the parade areas in the Treme neighbourhood.

By way of self encouragement I’m going to review some of those portraits (good and bad) to focus my own thinking on the new project which will be local to me in London. For some reason, despite shooting almost everything in Black and White, I prefer portraits in colour. Everything I’m going to feature was shot on medium format Kodak Porta on a Mamiya RZ.

The first is a photo of a member of the Zulu Social Aid and Pleasure Club, one of the most important local Krewes in New Orleans. It was shot in the build up to a parade in Treme in the open shade of a creole cottage. All the portraits I took were with consent and thus ‘posed’. What I like about this shot is the fact that, despite being aware I was taking his portrait, the subject doesn’t look to camera. This gentleman seemed to know everybody and everybody knew him. He was constantly distracted by people saying hello and that was captured in the shot. Technically it’s not brilliant. It’s not quite sharp and the shadow on the face is a little heavy, but overall I still quite like this one (click the image to view properly).